International Journal of Biochemistry and Pharmacology 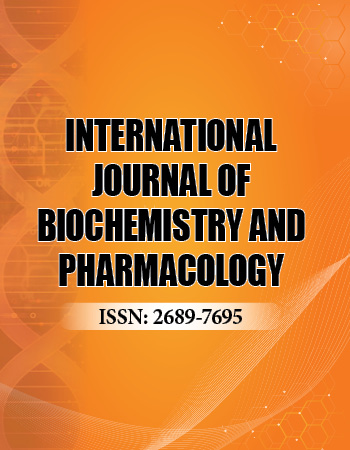 Cancer is a killer disease in humans registering high just like HIV/AIDS and Tuberculosis [1]. Currently there is no available sure drug for treating cancer. Scientists are working by the clock to either obtain treatment or get long-term management of the disease [2]. The disease is characterized by uncontrolled growth of abnormal cells in the body developed when normal growth regulatory mechanisms fail. Old cells do not die and cells grow out of control forming new abnormal cells with a mass of tissues called tumors [3].

Some fruits offering dietary requirements have medicinal properties. However, some fruits have more value than others [4]. Non-fruit eaters exhibit ill health problems such as weak bones development and poor skin growth. It is paramount to not only plant fruit crops but also routinely consume fruits for good health [5]. Pawpaw and safflower are considered very important diet supplements. However, pomegranate in not considered a serious fruit. It is taken only for libido enhancement in most parts of the world [6].

Pawpaw (Carica papaya) originally came from Southern Mexico and Cost Arica [7]. Later the Spanish introduced the papaya to the Caribbean and Asia during the exploration in the sixteenth century, and thereafter it was distributed to other parts [8]. In nature, papaya exists as dioecious plants. The male and female flowers occur on different plants. Fruits result from cross pollination, self-pollination or pathenocarpy [9]. Various parts of pawpaw have been traditionally used as ethno medicine for a number of disorders [10]. Scientific reports have shown patients with advanced cancer achieving remission following consumption of tea extract made from papaya leaves [11]. However the precise cellular mechanism of action of pawpaw tea extracts remains unclear [12].

Safflower is a native plant of Asia though currently found in most parts of the world like Kenya [13]. It is an annual herbaceous plant growing mostly in hot and dry areas [14]. The plant is drought tolerant due to its ability of obtaining moisture from levels not available to majority of crops [15]. It is mostly used for extraction of oils which are used to generate biofuels, improving blood circulation and has anti-oxidant effects [16]. In addition, safflower has alkaloids that are used in the treatment of breast cancer. It is therefore an important plant for pharmaceutical industries [17].

Pomegranate (Punica granatum L.) is a small tree, growing up to 7 m in height [18]. Some trees may live longer than 100 years. The root is knotty, consistent and reddish, well developed and extremely absorbent in saline soils [19]. Numerous suckers grow beside the trunk and have to be eliminated occasionally. The leaves in vegetative or mixed clusters measure about 2 to 9 cm in length and 1 to 3 cm in width [20]. The flowers appear singly or in small clusters generally of 2-7 flowers, occurring at the end of the branch but sometimes on the auxiliary buds [21]. The fruit is a fleshy berry denominated balausta, thick skinned, complex, enclosed by the thallus, with various polyspermal cavities separated by tenuous membranous partitions (carpelar membranes). The fruits have traditionally been placed into a number of uses due to its anthelminthic properties, antioxidant activities among others [22]. This study aimed at determining the effect of pawpaw, safflower and pomegranate extracts on onion mitotic cell division.

The research work presentation in this article was carried out in the biological sciences research laboratories in Egerton University Njoro Campus located 30 km from Nakuru town. Njorolies 180 km North West of Nairobi town on the Njoro-Mau-Narok road situated on prime Agriculture land at an altitude of 2,250 m above sea level [23].

Pawpaw, pomegranate and safflower leaves, roots and seeds samples were collected from Egerton University main campus, Njoro Kenya. The samples were separately washed with running tap water and finally with distilled water to sterilize them. In addition, surface sterilization using 70% ethanol was carried out.

The leaves root and seed samples were dried under shade. Each sample was cut into small pieces using sterile scalpels and crushed using sterile pistil and a motor. Separately, 50.0 g of each sample was placed in Erlenmeyer flasks having petroleum ether, chloroform, ethyl acetate and methanol. The flasks were covered with aluminium foil and allowed to stand for seven days for extraction of the crude extracts to take place. The mixtures were separately filtered through Whatman filter paper no.1 and the filtrate concentrated in a rotary evaporator. The solvents were evaporated and the extracts dried using a vacuum evaporator. The crude extracts were resuspended and serially diluted up to 104 [24].

Determination of the chemical compounds in the plant extracts

Test for glycosides: 1 mL of each crude extract was added to 3 mL chloroform and 10% ammonium solution. Formation of pink color indicated the presence of glycosides.

Test for Phenols: 1 mL of each crude extract was added to 2 mL distilled water followed by few drops of 10% ferric chloride. Formation of blue/green color indicated the presence of phenols.

Test for flavonoids: 1 mL of each crude extract was placed in separate test tubes. A piece of magnesium ribbon was added followed by drop-wise addition of concentrated HCl. A colour change from red to crimson indicated the presence of flavonoids [26].

Test for tannins: Two milliliters of each extract was placed in separate test tubes. Three drops of 5% ferric chloride (FeCl3) solution was added. A green-black or blue colouration indicated presence of tannin [27].

Test for saponins: 1 mL of each extract was dispensed in separate on test tubes. About 5 mL of distilled water was added and shaken vigorously. A persistent froth that lasted for about 15 min indicated the presence of saponins [28].

Collection and preparation of the bulb onions

Red cleore variety of bulb onions were collected from Njokerio market. The onions were sterilized using 70% ethanol. The roots were trimmed to the base using a sterile surgical blade.

Treatment of the bulb onions with the plant extracts

The pomegranate, pawpaw and safflower extracts were diluted to a concentration of 500 µg/ml and placed into culture bottles. The onions were placed on the bottles with the roots touching the extracts and allowed to stand for 5 d. The length of the roots was measured. Distilled water was used as a control.

The root tips were chopped off using a surgical blade. The root tips were separately transferred onto glass petri dishes containing 1 M hydrochloric acid for 5 min was carried out. The macerated root tips were separately placed on sterile glass slides. Two drops of acetic orcein stain was added onto each glass slide. The set ups were left for about 15 min to stain. Cover slips were gently placed on the slides. The slides were microscopically examined to establish the occurrence of different stages of mitotic cell divisions.

Weight of the crude extracts

Length onion roots after exposure to the crude extracts

During interphase, most cells on both the control and treatment samples had condensed chromosomes around the nucleus (Figure 1A). However, the roots growing on the treatment samples were few with few cells. At prophase, the chromosomes had migrated within the cell and were not as condensed as in inter phase (Figure 1B). In addition, there were very few cells from the onions growing in the pawpaw and pomegranate metaphase phase (Figure 1C). At anaphase stage, the cells from onions grown in distilled water and the few cells from onions growing in pawpaw and pomegranate extracts separated and moved to the opposite poles of the cell (Figure 1D). The telophase stage was evident in negative control containing distilled water as well as in dilute concentrations of the pawpaw and pomegranate extracts (Figure 1E). The cells were observed to have chromosomes that migrated to the poles with some faint borders.

In the current study, the weight of crude extracts between pomegranate, safflower and pawpaw did not vary significantly (F=0.1295 P=0.8809). However, the yield was higher in pomegranate than safflower and pawpaw. This agreed with a former study carried out by Turrini et al. [29]. This could be attributed to plants accumulating the same crude extracts [30]. In addition, Jazayeri and Samadi [31] asserted that plants growing in the same geographical conditions synthesize the same chemical compounds.

However, the chemical compounds obtained from safflower, pomegranate and pawpaw in this study (Table 2) differed with those obtained in a study on comprehensive characterization of safflower oil for its potential applications as a bioactive food ingredient [32]. A possible reason for the difference could be differences in the varieties of the plants from which the extracts were obtained [33]. Chang et al. [34] asserted that the accumulation of chemical substances in plants is also dependent on the physico-chemical characteristics of the soil in which a plant grows.

Although the length of roots in onions exposed to crude extracts from safflower, pomegranate and pawpaw increased with increase in dilution, the increase was more in pawpaw than in pomegranate and safflower (Table 3). This concurred with a previous study carried out in China [35]. This may be attributed to the dilutions of the active ingredients in the crude extracts [36].

The stages of mitotic cell division occurred normally in distilled water. However, mitosis was reduced after exposure of the onion roots in the crude extracts from pomegranate, pawpaw and safflower. This agreed with a previous study by Sahira Banu and Cathrine [37]. This may be attributed to presence of the same chemical compounds in the crude extracts in the two studies.

The crude extracts from pomegranate, pawpaw and safflower inhibited root development in onions. This suggested that the extracts have antitumor properties.

There is need of testing the crude extracts tumorous to determine whether they have the potential of curing or protecting against cancer.