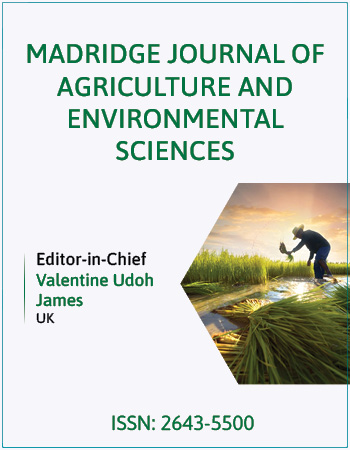 Organic materials are important resources for the improvement of soil physical and chemical properties. This study was carried out to examine the impact of tillage and organic matter on some soil structural indices. The study was designed in a split-plot Randomized Complete Block with four replications. Hoe tillage and no-tillage were assigned to the main plot, whilst the subplot comprised cowpea residue, cattle manure, maize residues, elephant grass and control (no organic residue applied). The soil physical parameters measured were bulk density, total porosity, volumetric water content and aggregate stability. Bulk density was lower in the 2013 minor season than in the 2014 major season for all the treatments (1.34 Mg m-3–1.51 Mg m-3). Porosity ranged from 42.98–49.28% in the second season (2013 minor season). The cattle manure treated plots produced the highest volumetric water content of 20.25% and the control gave the lowest value of 16.20% at the end of the last growing season (2014 major season). The highest aggregate stability (74.91%) was recorded on cattle manure plots whilst the control gave the lowest value (71.11%). Crop residues were identified to be good source of organic material for the improvement of soil physical properties.

The main purposes of tillage practice in agricultural fields are to provide better conditions for seed germination and emergence, control weeds, manage crop residues and manure to improve soil health, improve infiltration, which enhances soil moisture storage, and reduces runoff and erosion [1,2]. Crop residues can either be incorporated into the soil (tillage) or left on the soil surface as a mulch (no-tillage). According to Holland [3], soil structure and its stability can be improved by reduced tillage and notillage, which tend to increase soil moisture and organic matter content. This could be the result from the reduced or no use of heavy machinery which enhances aggregate formation and improves porosity and infiltration.

Zero tillage, mulching and cover cropping have also been recommended for sustainable soil health [4]. Conventional tillage is known to cause the breakdown and/or exposure of protected soil organic matter which accelerates its decomposition [5]. The breakdown of soil organic matter may increase soil compaction [6], slaking of aggregates, and surface sealing/crusting, which reduces water infiltration, soil water holding capacity, and increases surface ponding, run off and erosion [7]. In view of this, tillage methods should be developed to provide a better soil-water-plant relationship for sustainable crop production. The objective of the study, therefore, was to evaluate the contribution of conservation tillage, and crop residue and manure application on the improvement of soil physical properties.

The field experiment was carried out on the research fields of CSIR-Crops Research Institute at Fumesua (01° 36W; 06° 43N) in the moist semi-deciduous forest zone of Ghana with an elevation of 186 m above sea level. The area has a bimodal rainfall pattern with average annual rainfall of 1727.2 mm with mean minimum and maximum temperatures of 21°C and 31°C, respectively. The mean annual relative humidity is 61% at noon and 95% in the morning. The soil at the experimental site is classified as Ferric Acrisol [8]. It has a thick surface layer and a slope of 1-5%. It is a sandy loam with the top soil being dark brown in colour with a granular structure.

The study was conducted on plots that had previously been cultivated with cowpea. The study was laid out in a splitplot arranged in Randomized Complete Block Design (RCBD) with four replications. There were 8 main plots and 40 subplots which covered a total land area of 1456 m2. Hoe till (incorporation of organic materials with hoe) and no-tillage (application of organic material on the soil surface) were assigned to the main-plots while the sub-plots comprised cowpea residue (CR), maize straw (MSR), elephant grass (EGR), cattle manure (CM) and control (C) (absence of organic material). The experiment was carried out in 2013 and 2014 major seasons and 2013 minor season. The crop residues were dried and cut into pieces. They were applied two weeks before planting at a rate of 10 tons/ha. Cattle manure was also applied at a rate of 4 tons/ha the same day the crop residues were applied.

Moist soil samples collected with a core sampler from a depth of 0–15 cm after three days of heavy rainfall, when the soil was assumed to be at field capacity. Volumetric moisture content, bulk density and total porosity were determined from these samples as described by Klute [9]. Aggregate stability was determined using modified wet sieving method [10]. The data collected on various parameters was subjected to analysis of variance using Genstat software programme (2010). The means were separated using Least Significant Difference at 5% probability.

The tillage treatments did not have any significant (P>0.05) impact on total porosity in all the three seasons (Table 2). There were no significant differences (P>0.05) among organic material treatments in 2013 and 2014 major seasons. However, in 2013 minor season, plots treated with organic materials produced significantly (P<0.05) higher porosity values than the control, specifically in the increasing order of C

Bulk density influences other physical properties as well as chemical and biological properties of the soil. The bulk density decreased marginally in the second season and increased in the last season (Table 1), confirming the fact that it is a dynamic property. Tillage operations (conventional) are known to initially decrease bulk density which tends to increase with time due to the settling of the soil particles under the impact of rain drop [11-13]. It is evident from table 1 that bulk density from the hoe tillage and no-tillage plots in the study was not significantly different. This could have resulted from the fact that the hoe tillage employed in this study did not cause much soil compaction as may be observed in conventional tillage, wherein wheel traffic could result in severe soil compaction. Rashidi and Keshavarzpour [14] found that soil bulk density was higher in no-tillage when compared to conventional tillage.

The organic materials had significant impact on bulk density only in the 2013 minor season. Cowpea residue generally had the lowest bulk density in the study indicating that crop residues could improve bulk density with positive impact on other soil properties. This might have been due to its lowest C:N ratio, which possibly enhanced its decomposition with a loosening effect on the soil leading to the reduction in the soil bulk density. This may have a concomitant impact on infiltration rates. Soil porosity is an important factor in soil hydrology because it influences the movement of water in the soil [15]. In this study, tillage treatments did not differ significantly from each other in porosity in all the three seasons (Table 2). Apart from the short-term nature of the study, this may also be due to the fact that the two tillage systems used did not cause much soil compaction. The organic material treatments in the study generally improved total porosity probably due to their positive impact on soil structure and activities of soil organisms. Tangyuan et al. [16] reported that soil total porosity in the 0 to 10 cm soil layer increased under conventional tillage and residue retention. Proper management of crop residues is therefore an essential means of enhancing soil porosity.

The volumetric water content was determined as an indicator of the amount of water that was retained in the soil at field capacity. The results showed that tillage and no tillage did not have any significant impact in the first two seasons (Table 3). In the last season, however, the volumetric water content was higher in no-tillage than tillage plots, possibly due to their cumulative effects over time. Differences in soil properties under tillage practices are noticeable with time [17]. Similarly, Sharma et al. [18] reported that the highest amount of soil moisture was retained in no-tillage when compared with minimum and conventional tillage systems. Assuming a constant rate of temperature and possibly insignificant water in deep percolation, soil moisture depletion would be mainly through evaporative loss [19]. In this context no-tillage was a better practice in soil moisture conservation (as observed in the third season) due to the mulch residues on the soil surface.

The trend observed for the organic material applications showed that their effects on the soil physical properties can only be noticed with time. Moisture content was found to be higher in the organic materials treated plots than the control plots but the differences were not significant in the first two seasons (Table 3). However, significant improvement was observed in the last season. This could have resulted from improvements in the soil structure owing to the decomposition of the organic materials applied in the previous two seasons. The mulch on the no-till plots possibly reduced runoff and increased infiltration. The surface mulch also might have reduced the rate of evaporation by mitigating turbulent air movement over the soil surface as compared to the bare soil surface. In addition, the grass mulch reduced the latent heat flux in the soil and decrease the rate of evaporation, which increased the accumulation of soil water [20]. Surface mulch is also known to serve as a barrier to restrict water movement over the soil surface this enhancing water infiltration and storage. Higher water content as a result of surface cover under no-tillage has also been linked with lower soil temperature [21]. Tilling of plots usually expose surface soil to water loss through evaporation. This implies that proper management of crop residues can enhance soil moisture conditions.

The current study suggests that different tillage treatments and application of organic materials affected the soil physical properties. Specifically, the no tillage treatment and application of organic materials effectively improved the soil structure, soil water holding capacity as evidenced by the soil moisture contents, and strengthened the stability of water-stable soil aggregates. Therefore, conservation tillage in combination with proper management of residue mulching or organic matter application is a better option for sustainable soil and environmental management for farmers, especially those with low economic status.

The authors wish to express their profound gratitude to the Alliance for a Green Revolution in Africa (AGRA) for the financial support received for the research.