Textile dyeing industries are facing challenges as it is one of the most chemically intensive industries in the world. This industry has been known as one of the major sources of water consumption as well as water pollution [1]. The primary function of water is to rinse the excessive dyes off from the colored and printed fabric. Water is also required for cleaning the printing machine to remove loose color paste from printing blankets, screens and dye vessels [2]. The dyeing process demands huge quantities of water for only small amount of dyed fabric with water to dye ratio is 15:1 [3]. Wastewater from dyeing process is often discharged into the lakes, rivers and other water resources causing water pollution. Dyes have chronic effect towards the exposed aquatic organisms, highly visible even in small concentration and not easily degradable by light, chemical and biological substances if not properly treated [4]. The adsorption technique so far is among the most versatile technique for dyes wastewater treatment. It has advantages such as high efficiency in removing dyes, low initial cost, easy to operate and simplicity of design [5]. Adsorbent particularly activated carbon (AC) has special characteristic such as high adsorption capacity and surface area which make it suitable to adsorb dyes. In this study, local Balingian lignite coal based activated carbon (LCAC) was used as adsorbent for removal of methylene blue (MB) dye from aqueous solution.

The preparation of LCAC was conducted using the experimental setup shown in Figure 1. The equipment used consists of vertical tubular furnace having dimension of 500 mm long with 82 mm diameter with programmable controller (Model Carbolite, USA). A stainless-steel tubular cylinder with inner diameter of 25 mm and 150 mm long used for placing the sample was held in the center of the furnace. A wire mesh made of stainless steel is place at the bottom of cylinder to prevent the sample from falling out. The temperature within the sample bed in the reactor was measured by a K-type thermocouple. The flue gas emitted from the reactor was condensed using a condenser at the bottom of the vertical tubular furnace.

The Balingian lignite coal was placed in tubular reactor and carbonized at temperature of 600°C for 1 hour under the nitrogen flow of 150 ml/min (purity=99.99%) followed by activation with CO2 (purity=99.99%) gas at 900°C for 2 hours. Then, the reactor was cool to room temperature under nitrogen flow. This LCAC produced has high surface area and total pore volume of 750.7m2/g and 0.511 cm3/g, respectively. 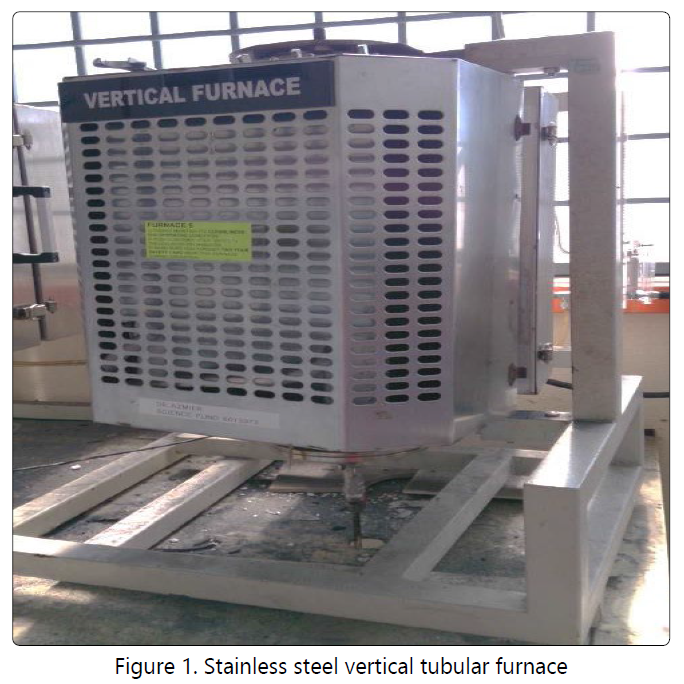 MB dye supplied by Sigma-Aldrich (M) Sdn Bhd, Malaysia was used as an adsorbate. Distilled water was used for preparing all solutions. Batch equilibrium tests were carried out for MB adsorption on the LCAC prepared. The effects of MB initial concentration, contact time, and temperature on the adsorption uptake were investigated. The MB solutions were withdrawn at equilibrium to determine the residual concentrations. The MB concentrations in the supernatant solutions before and after adsorption were determined using a double beam UV-Vis spectrophotometer (Shimadzu UV-1800, Japan) at its maximum wavelength of 668 nm. The MB uptake at equilibrium was calculated by Eq. 1.

where Co and Ce (mg/L) are the liquid-phase concentrations of MB at initial and at equilibrium, respectively. V is the volume of the solution and W is the mass of dry adsorbent used.

Figure 2 shows the effects of contact time and MB initial concentration on the MB uptake on the LCAC at 30°C. The plots show that the MB adsorption increased with time and reached a constant value beyond which no more MB was further removed from the solution. The amount of MB adsorbed at the equilibrium time reflected the maximum adsorption uptake of the LCAC. The MB adsorption was fast at the initial stages of the contact period, and thereafter it became slower near the equilibrium. This phenomenon was due to the large number of vacant surface sites were available for adsorption during the initial stage [6]. After a lapse of time, the remaining vacant surface sites were difficult to be occupied due to repulsive forces between the solute molecules on the solid and bulk phases [7]. 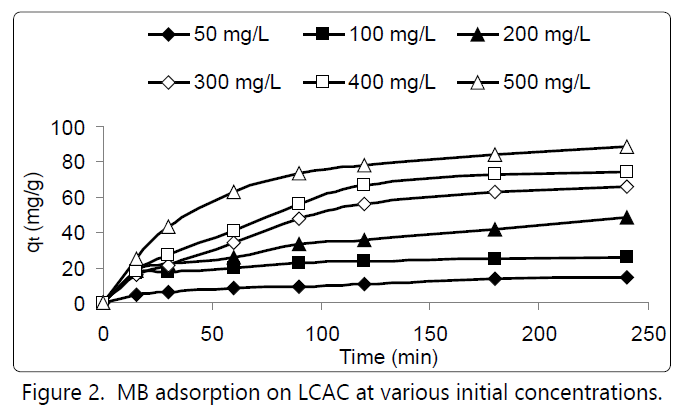 The adsorption isotherm indicates how the adsorption molecules distribute between the liquid phase and the solid phase when the adsorption process reaches an equilibrium state. The analysis of the isotherm data by fitting them to different isotherm models is an important step to find the suitable model that can be used for design purpose. The isotherm data were fitted to the Langmuir, Freundlich and Temkin isotherms. The Langmuir isotherm is represented by the following linear equation [4]:

where Ce (mg/L) is the equilibrium concentration, qe (mg/g) the amount of adsorbate adsorbed per unit mass of adsorbate, and qm and KL are the Langmuir constants related to adsorption capacity and rate of adsorption, respectively. When Ce/qe was plotted against Ce, straight line with slope 1/ qm was obtained. The Langmuir constants KL and qm were calculated from this isotherm and their values are listed in Table 1.
The linear form of the Freundlich equation is [9]:

where qe is the amount adsorbed at equilibrium (mg/g) and Ce is the equilibrium concentration of the MB. KF and n are Freundlich constants, n giving an indication of how favorable the adsorption process and KF (mg/g (L/mg)1/n) is the adsorption capacity of the adsorbent. The plot of ln qe versus ln Ce gives straight lines with slope 1/n. Freundlich constants (KF and n) were calculated and listed in Table 1. Temkin isotherm is represented by the following equation [10]:

Equation 4 can be expressed in its linear form as

A plot of qe versus ln Ce enables the determination of the isotherm constants At and B. At is the equilibrium binding constant (L/mg) corresponding to the maximum binding energy and constant B is related to the heat of adsorption. The values of the parameters are given in Table 1.

Based on the R2, Freundlich isotherm seemed to represent the equilibrium adsorption data with better fit as compared to the other isotherms. This explains the heterogeneous nature of the LCAC surface [5]. The value of n was greater than unity, suggesting that MG dye was favorably adsorbed by LCAC.

The present investigation showed that LCAC was an effective adsorbent for the MB adsorption from aqueous solution. MB adsorption of was found to increase with increase in contact time and initial dye concentration. Isotherm study of MB onto LCAC was best fitted by Freundlich isotherm model which indicated multilayer adsorption process occurred on heterogeneous surfaces.

The authors are grateful for the funding from Solid Waste Management Cluster (RU 1001/CKT/870023) and Bridging Grant of Universiti Sains Malaysia.