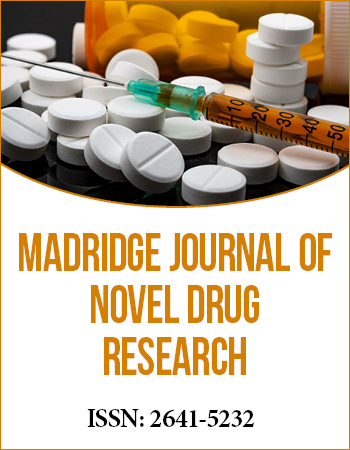 A novel, simple and economic reverse phase high performance liquid chromatography (RP-HPLC) method has been developed for the quantification of duloxetine HCl (DLX) in bulk and tablet dosage form with greater precision and accuracy. Separation was achieved on inertsil ODS C18 (250mm×4.6×5micron) column in isocratic mode with mobile phase consisting of Acetonitrile: Potassium dihydrogen phosphate buffer (pH 4.9) (43:57v/v) and conditions optimized were: flow rate was 1 ml/min. The detection was carried out at 230 nm. The retention time of Duloxetine HCl was found to be 4.440 min. The method was validated as per ICH guidelines. Linearity was established for Duloxetine HCl in the range10–120μg/ml with R2 value 0.999. The percentage recovery of Duloxetine HCl was found to be in the range 99.82-100.25 %. The high recovery and low relative standard deviation confirm the suitability of the proposed method for the estimation of the drug in bulk and tablet dosage forms. Validation studies demonstrated that the proposed RP-HPLC method is simple, specific, rapid, reliable and reproducible for the determination of Duloxetine HCl in comparison to previous reported methods for Quality Control level.

The chromatographic analysis was performed, under ambient conditions and in isocratic mode, with Waters Alliance High Pressure Liquid Chromatography, Model: Waters e2487 dual absorbance, a variable wavelength PDA detector operated at 230 nm was used. The output signal was monitored and integrated using Empower Solutions software. The analysis was performed on a Inertsil ODS 3V 5μ, 250 × 4.6 mm column. The mixture of pH 4.9 Potassium dihydrogen phosphate buffer and acetonitrile was used as mobile phase (57:43, v/v) at a flow rate of 1.0 ml /min. The eluent was filtered through a 0.45 μm nylon membrane filter and degassed by using ultrasonicator. Various trials are shown as in Table 1-3.

10g of Duloxetine HCl pellets were weighed and ground into fine powder using a mortar and pestle. Powder equivalent to 40 mg of drug was transferred to a 50 mL volumetric flask and 25mL of mobile phase was added and sonicated for 10 min and diluted to volume with mobile phase. The solution was filtered through a 0.45μm nylon membrane filter. From the filtrate an appropriate aliquot was taken in such a way that the final concentration in 50 mL lies within the linearity range tested.

The method was validated in accordance with ICH [15] guidelines. The parameters assessed were linearity, accuracy, and precision, reproducibility, robustness and system suitability.

The accuracy of the method was determined by calculating the recoveries of duloxetine HCl by the standard addition method. Known amounts of standard solutions of duloxetine HCl was added at 50%, 100% and 150 % level to pre-quantified sample solution (80μg/ml) of duloxetine HCl and each injected three times into the chromatographic system. The percentage recovery of added drug was estimated by measuring the peak area and by fitting these values to the straight-line equation of calibration curve. Recovery (%), RSD (%) and bias (%) were calculated for each concentration. Accuracy is reported as percentage bias, which is calculated from the expression

The system precision was established by injecting six replicate injections of standard solution in to the chromatographic system by maintaining the optimized chromatographic conditions.

Six replicate samples of drug product (n=6) at 100% of concentration (80 μg/ml) were prepared and injected into the chromatographic system. The results were reported in terms of relative standard deviation (% RSD).

Six preparations individually using single batch of duloxetine HCl drug substance as per test method and injected each solution induplicate on the same day in to HPLC using different column, system and analysts on different days. And %RSD value was calculated to determine inter-day precision.

The concept of robustness of an analytical procedure has been defined by the ICH as "a measure of its capacity to remain unaffected by small but deliberate variations in method parameters". To determine the robustness of the method experimental conditions are purposely altered and chromatographic characters are evaluated. Influence of small changes in chromatographic conditions such as change in flow rate (± 0.1ml/min), wavelength of detection (±2nm) and acetonitrile content in mobile phase (±2%) were studied to determine the robustness of the method

The limit of detection (LOD) of an analytical method may be defined as the concentration, which gives rise to an instrument signal that is significantly different from the blank. For spectroscopic techniques or other methods that rely upon a calibration curve for quantitative measurements, the IUPAC approach employs the standard deviation of the intercept (Sa), which may be related to LOD and the slope of the calibration curve, b, by

Where, Sa is the standard deviation of the peak area ratio of analyte to IS (6 injections) of the drugs and b is slope of the corresponding calibration curve.

Linearity indicates the ability of analytical procedures to produce results that are directly proportional to the concentration of analyte in the given sample. A series of solutions of drug substance standard were prepared in the specified concentration range. These solutions were injected into the HPLC and linearity was determined by observing peak areas. A graph of peak area versus concentration (on X-axis concentration and on Y-axis Peak area) was plotted and the correlation coefficient was calculated.

The evaluation of the linearity was performed with a seven-point calibration curve over the concentration range of 20–120 μg mL-1 with a % RSD of less than 2. The slope and intercept of the calibration graph was calculated by using linear regression analysis. The regression equation of the calibration curve was: y = 11333x- 67760; R2 = 0.999 and shown in Fig.2. A correlation coefficient of 0.999 suggests that the developed HPLC method had an excellent linearity over the investigated range and the results obtained in Table 4.

The accuracy of the method was determined. The mean recovery was found to be 99.96% and the %RSD was found to be 0.85 (%RSD ≤2%). The accuracy study indicates that the developed HPLC method was accurate and there was no interference from the exipients present in the dosage form and shown in Table 5 and Fig.3-5.

The precision of the method was evaluated with standard samples at 100% concentration using six replicates. The System and Method precisions were satisfactory with %RSD less than 2 and shown in Table 6 &7 and Fig. 6-7. This indicates that the developed HPLC method was reproducible.

Acceptance Criteria: The % RSD should be less than 2.0%

The ruggedness of the method was determined by preparing standard solution by two analysts (n=6). The relative standard deviation was < 2%. The results of the study prove that the method is rugged and shown in Table 8.

When the optimized chromatographic conditions were deliberately altered, the chromatographic parameters such as peak area, retention time and theoretical plates (N) were remained within the acceptance limits. The results prove that the method is robust and is shown in Table 9.

The limit of detection of duloxetine HCl was found to be 1.24 μg/ml.

The limit of quantification of duloxetine HCl was found to be 4.092 μg/ml.

Assay results of the marketed formulation is shown in Table no.10 and Fg.no.8.

A New RP-HPLC method indicating assay of DLX in bulk and in pharmaceutical dosage forms is established. This method is simple, reliable, linear, accurate, sensitive and reproducible as well as cost effective for the effective quantitative analysis of duloxetine HCl in bulk and tablet formulations. The method was completely validated showing satisfactory data for all the method validation parameters tested and method is free from interference of the other active ingredients and additives used in the formulations. Therefore the method is suitable for use of the routine quality control analysis of duloxetine HCl in API or in pharmaceutical dosage forms.

The authors would like to acknowledge the contributions of MNR College of Pharmacy, Fasalwadi, Sangareddy, Medak, Telangana, India for providing necessary facilities to carry out the research work.