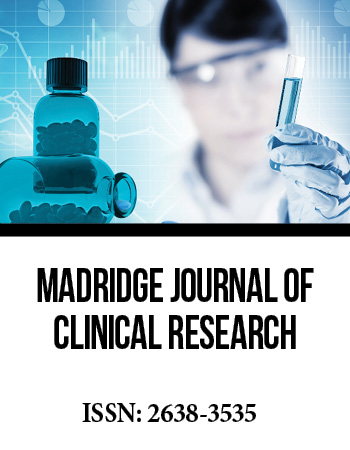 Study: Role of FDG PET/CT imaging in follow up of Breast Cancer: Our Institutional Experience

Introduction: Breast cancer is the most commonly occurring cancer in women and the second most common cancer overall. Early diagnosis of recurrent and metastatic disease in patients with breast cancer is of the highest importance in management of this disease.

Objective: To evaluate the role of FDG-PET/CT scan in follow up of breast cancer.

Methods: We studied 87 female patients with breast cancer that were referred for an FDG-PET/CT scan because of elevated tumor markers and negative or equivocal findings in conventional imaging studies. PET/CT images from January 2018 to March 2019 were respectively reviewed. All imaging was done at Clinic for Nuclear Medicine, Clinical Centre University of Sarajevo. All patients underwent a whole-body FDG-PET/CT scan in a combined PET/CT imaging.

Conclusion: The FDG-PET/CT scan plays an important role in follow up of breast cancer patients with a significant clinical impact on further management in these patients.

In the Federation of Bosnia and Herzegovina, breast cancer is the third most common cause of cancer death overall with a share of 6.6% representing a decrease compared to 2016 when it was 7.0%. It is the most common cause of cancer death in women in Federation of Bosnia and Herzegovina. The number of new patients diagnosed with breast cancer in last year was 569 which represent 18.3% of new cases of all malignant diseases [4].

Approximately 30% of breast cancer patients are likely to develop recurrence [5]. The presence of recurrent local and/or metastatic disease is generally associated with a poor prognosis [6]. Therefore it is of great importance to detect any local, regional or distant metastases as early and as accurately as possible to further better management of the disease and for therapy planning.

Conventional imaging modality like mammography, chest radiography, ultrasound (US), CT and MRI are usually the primary tools used in investigation of recurrent and/or metastatic disease. Although quite accurate, these imaging modalities do not always have the ability to precisely detect and localize recurrent disease mainly because they are not performed for the whole body, but rather for certain regions of the body. Therefore, it is difficult to evaluate the full extent of the disease. Also, modalities like CT and MRI define the nature of lesions, i.e., whether they are benign or malignant, based primarily on their size which can be a limiting factor for evaluating therapy response [7].

18F Fluorodeoxyglucose Positron-emission tomography (FDG PET) is a modality that demonstrates abnormal metabolic features associated with malignancy that often precede morphologic findings demonstrated with anatomic imaging [8]. It was found to be a sensitive modality in the assessment of breast cancer recurrence with a sensitivity ranging from 89% to 100% [9]. However, its specificity is often affected by the lack of anatomical localization and morphology. This is why hybrid imaging was introduced. Combined PET/CT systems are increasingly in use in nuclear medicine. In these systems, the PET images are fused with CT images and thus provide combined anatomic and metabolic imaging. The CT imaging is used to provide attenuation correction as well as better anatomic correlation for the PET imaging component. This modality allows more precise anatomic localization of PET abnormalities and in general has been shown to improve diagnostic accuracy compared with FDG PET alone [8].

Metastatic breast cancer is often responsive to systemic therapy, and although a cure is rarely achieved, with appropriate therapy, patients often have prolonged survival and preserved quality of life. FDG PET/CT can be particularly useful in this setting to evaluate the response of metastatic breast cancer to systemic therapy, since conventional imaging is often challenging in this setting.

The aim of this study was to evaluate the role of FDG-PET/CT scan in follow-up of breast cancer.

In our study we evaluated 87 female patients with breast cancer that were referred for an FDG-PET/CT scan because of suspicion for recurrent disease, who had elevated tumor markers or negative or equivocal findings in conventional imaging studies. PET/CT images from January 2018 to March 2019 were reviewed. All imaging was done at Clinic for Nuclear Medicine, Clinical Centre University of Sarajevo. All patients underwent a whole-body FDG-PET/CT scan in a combined PET/CT imaging. Approval was obtained from the Ethical Committee of the Medical Faculty, University of Sarajevo. All patients provided written informed consent to participate in the study.

Imaging was done on PET/CT GE scanner. The protocol for the imaging was as following: Patients fasted for at least 6 h before receiving an intra-venous injection of 3 MBq/kg 18F FDG (maximum of 370 Mbq). Blood glucose level was measured before injection of the tracer, to ensure a level below 8.0 mmol/l. The imaging was done 60 minutes after the injection. First, the CT scan was performed using the following parameters: 120 mAs, 130 kV, 5 mm slice collimation. Then PET imaging was performed in 3-D mode with an acquisition time of 3 min per bed position (axial FOV16.2 cm). Images were acquired from the base of the skull to the mid-thigh level in the “arms-up” position. The CT acquisition was used for attenuation correction, fusion and for diagnosis.

Early diagnosis of recurrent and metastatic disease in patients with breast cancer is of the highest importance in management of this disease. Detection of recurrent disease and distant metastases can affect the course of therapy and also enable insights into the effectiveness of the current therapy.

Therefore, it is of significant value to determine a diagnostic modality that is able to detect the full extent of the disease, including the number of sites and their localization.

The added value of FDG-PET/CT compared to other diagnostic modalities is mainly due the fact that a noninvasive whole body evaluation is possible in a single examination. It should be performed when there is strong suspicion of recurrent breast cancer disease.

In their study, Tatsumi et al. examined 69 patients; 61 of whom were examined because of suspected recurrence or for follow up. Out of 61 patients PET/CT accurately staged 52, the sensitivity, specificity and accuracy for the total population evaluated were 84%, 88%, 86%, respectively [9]. In this study among 58 pathological studies, 11 patients (11%) had recurrent disease.

In a large retrospective study, Manhor et al. investigated 111 patients with clinical suspicion of breast cancer recurrence or metastatic disease using PET/CT. They showed that PET/CT is a very sensitive and specific tool in detecting and restaging recurrent breast cancer. They reported sensitivity and specificity of 98.7%, 85.3%, respectively [10].

Aukema et al. demonstrated that PET/CT can detect distant metastases not visible on conventional imaging in patients with confirmed locoregional breast cancer recurrence. PET/CT was done for whole body staging in already diagnosed cases of recurrence in 5 patients to assess the extent of the disease. In 3 of 5 patients PET/CT revealed more metastatic sites in addition to those detected on conventional imaging modalities [11].

In this study we have shown that the PET/CT is useful in follow-up of patients with breast cancer. Indeed, the techniques accurately staged metastatic disease in 58 out of 87 patients. The majority of patients had lymph node and bone metastases, while there were also a significant number of patients with lung and liver metastases.