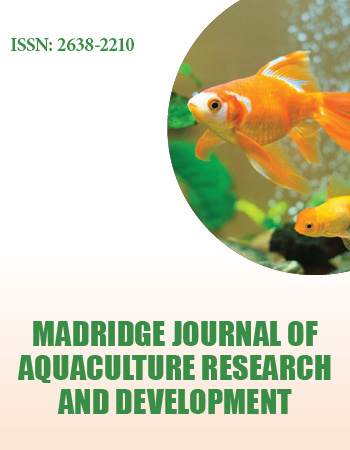 The Continuous Culture of Rotifer Brachionus plicatilis with Sea water

Rotifers are the favourable live food for fish larvae. A steady supply of rotifers is key factor for successful larviculture. The present study aimed to develop a simple zootechnique to reduce labour for high density culture of rotifers. Brachionus plicatilis (inoculation density: 737 ± 80 organisms/ml) were cultured in 100 l plastic, cylindrical tanks using 100% sea water. The water was renewed on every 5th day of culture without any further exchange of water in between. The culture was continued for 32 days. Rotifers were fed with Chlorella spp. at the rate of 200/ml, twice daily. Total 1059 ± 25 organisms/ml was recorded on day-1 of culture. Significantly (P < 0.05) higher number of rotifers was recorded on day-4 compared to day-1. A 13.12% higher density was recorded on day-8 compared to day-4; the population was reduced 5% on day-12 compared to the previous day. Then the number of rotifer increased gradually. Significantly (P < 0.05) higher number of rotifer (1798 ± 25/ml) was recorded on day-20 compared to the remaining culture period. A gradual decreasing trend was found thereafter. Still the number of organism was more than 1000/ml.

The mixohaline rotifer Brachionus spp. (both L type and S type) is most commonly used live food in marine larviculture. Rotifers are important forage zooplankton as their size is appropriate for larval fish as a starter food during early exogenous feeding [1]. In Japan, an average hatchery requires 20 billion rotifers/day [2], [3]. Various culture techniques have been used for the production of this important live food organism. The production of Brachionus plicatilis (L type) is labour intensive. This species requires intensive care. The growth rate of L type rotifer tends to decrease above 26°C, whereas the S type rotifer (Brachionus rotundiformis) grows well even at 28°C or higher temperature. In Japan, most of the hatcheries use S type rotifer during summer when the temperature is >28°C. Usually, the concentration of rotifer in the culture system is around 100 organisms/ml, but the concentration may reach more than 1000 organisms/ml [4]. Various algae like Chlorella, Scenedesmus, Nanochloropsis, Isochrysis, Monochrysis, Dunaliella, etc. are used as food for Brachionus plicatilis. Brachionus plicatilis are fed with Dunaliella sp. at the salinity of 25-33 ppt and it is found that crowding up to 200 organisms/ml has no impact on reproduction [5]. Hirata [6] observes that the density of rotifer fed with microalgae and yeast can be maintained up to 500 organisms/ml. Brachionus rubens are grown on Scenedesmus at the density of 500 organisms/ml [7]. Brachionus plicatilis fed with Chlorella and bakerʼs yeast shows a growth efficiency of 25.4% [8]. Rotifers are batch-cultured at density of 100 to 300/ ml on a diet of microalgae and bakerʼs yeast; higher density of 300 to 700 organisms/ml may be grown by feeding with commercial diet Culture Selco and Rotimac [9].

The production of rotifers is influenced by various factors like temperature, salinity, quality and quantity of food, crowding etc. [5]. The instability of rotifer mass culture is an important unresolved problem. In European hatcheries, the major problem of rotifer culture is the unpredictability of production [10]. Cultures occasionally crash due to unexplained reasons [11]. Besides scarcity of food during crowding, high level of unionized ammonia may be harmful to rotifers.

In the traditional Japanese rotifer culture, a combination of marine and freshwater (70: 30) is used. The water temperature is usually maintained at 20°C under high aeration condition. Once the culture has been started, there is exchange of water in the following sequence: 30, 50 and 70% on days 2, 3 and 4. On fifth day, a fresh culture starts with 100% new water. Rotifers are fed with Chlorella spp. A piece of mat has been used for removal of dead algae and organic debris; the mat is cleaned every day. The density of rotifers is maintained around 400-500 organisms/l to achieve sustainable production. This is a labour intensive method.

The present investigation aims to develop a simple zootechnique for the production of Brachionus plicatilis with reduced labour and water exchange. Maintenance of higher density of organisms is also other objective of the study. This modified technique may attract aquaculturists for its simplicity, easy maintenance and higher production.

Brachionus plicatilis was cultured at Maizuru Fisheries Research Station, Kyoto University in 100 l plastic, cylindrical tanks using 100% sea water. This strain has been cultured for larval rearing at Fisheries Research Station since long time. The inoculation density was 737 ± 80 organisms/ml. Three replicates were used for the study. The culture tanks were cleaned on every 5th day (day-5) and were filled with 100% fresh sea water. The mat used for the removal of algae was cleaned on every other day. Rotifers were fed with Chlorella spp. at the rate of 200 algae/ml twice daily at 8.00 a.m. and 5.00 p.m. The culture was continued for 32 days. Water quality parameters like temperature, pH, salinity and dissolved oxygen were monitored at regular interval. Data were compiled as means ± S.E. All data were analyzed using oneway analysis of variance (ANOVA). Statistical significance was accepted at P < 0.05 level.

The present culture technique of rotifer was different from the traditional Japanese rotifer culture. Unlike traditional culture, cent percent sea water was used in the present study and there was no exchange of water. This is very useful for farmers; they have not to depend on freshwater. The tanks were cleaned on every 5th day and mat was cleaned on alternate day. This modified method saved manpower. Lavens and Sorgeloos [12] reported that Brachionus plicatilis were cultured (starting density 200/ml) with diluted sea water (25 ppt) at 25°C. Rotifers were fed with small amount of Culture Selco at I h intervals and the number of rotifers was 600/ml after four days in Europe. In a high density cultivation of Brachionus, Nannochloropsis was supplemented with concentrated bakerʼs yeast and yeast containing fish oil. Freshwater Chlorella was used with B12 supplementation. Using this system average 1000 rotifers/ml was obtained in Japan [12]. Suantika et al. [13] reported that daily 100% exchange of water enhanced the duration of culture period up to one week without any positive effect on the production of rotifer. In recirculating system, Brachionus plicatilis were cultured at three stocking densities of 3000, 5000 and 7000 individual/ml; a reliable production of 2.2 billion rotifers was obtained on daily basis during 3 weeks of culture [14].

In a 110 days continuous culture of B. rotundiformis (S-type) and B. plicatilis (L-type), Chlorella vulgaris was used as food and the production was 3000 - 6000 orgamisms/ml and 1100 - 2200 organisms/ml for S-type and L-type, respectively. The water temperature was 24°C (for L-type) and 30°C (for S-type); the salinity was 20 ppt [15]. In the present study, the density of Brachionus plicatilis ranged from 1059 - 1798 organisms/l during 32 days culture period. The water temperature and salinity ranged from 19.2 - 20.2 and 32.8 - 34.1 ppt respectively. In high density culture of rotifer, low dissolved oxygen, foaming separation and NH3 were inhibitory factors. Supply of oxygen in the culture system may help to overcome these problems [15]. In the present study, dissolved oxygen level ranged from 4.28 - 5.64 mg/l with an average value of 5.01 ± 0.28 mg/l. The water quality parameters in the present study were conducive for the culture for Brachionus plicatilis.

The present technique of rotifer culture has some advantages over the traditional culture method and the sophisticated culture techniques like recirculating culture. This is very simple. Rotifers were fed with Chlorella spp. and sea water was directly used without any dilution. Culture water was renewed only on every 5th day. The density of rotifers was obtained within the range of earlier study [16]. Therefore, this technique is less expensive in terms of price and labour.

This research was a part of a research fellowship funded by Japanese Government to Dr. Jai Gopal Sharma. Authors are thankful to the staff of Maizuru Fisheries Research Station, Maizuru and Kyoto University. Japan.