This study investigates the optimal conditions for preparation of rice husk based activated carbon (RHAC) using carbon dioxide gasification of rice husk char undermicrowave irradiation.The central composite design (CCD) was used todetermine the effects of the two preparation variables; microwave power and activation time on MB removal and RHAC yield. Basedon the CCD, a quadratic model and linear modelswere developed for MB removal and RHAC yield, respectively. The significant factors on each experimental design responsewere identified from the analysis of variance (ANOVA). The optimum conditions for RHAC preparation were obtained by using activation time of 4.28 min and microwave power of 440 W, which resulted MB removal of 83.05% and RHAC yield of 31.98%.

The textile industry uses dyes to color their product consume large quantities of water [1]. More than 100,000 commercially available dyes with over 7 x 105 tonnes of dyestuff produced every year have been estimated [2]. At the same time, massive amount of textile wastewater is produced during dyeing and finishing processes. One of the serious issues associated with textile wastewater is colored effluent as they produce an obvious color to water even at low concentration [3]. Therefore, the appearance of dyes onto streams and rivers are categorized as threatening pollutant that should not be neglected. Indeed, removal of dyes from the effluent before its disposal in water bodies is very important [4]. In the last few years, great attention has been placedon utilizing waste as precursor for producing lowcost activated carbon. In this study an attempt was made to find the optimum preparation condition of producing activated carbon from rice husk waste.

The rice husk was placed in a Pyrex glass reactor in the chamber of the microwave oven. The microwave irradiation was carried at targeted radiation time and radiation power under carbon dioxide flow of 150 ml/min as suggested by the Design Expert software. The response surface methodology (RSM) design known as central composite design (CCD) was used in this study. The variables involved were microwave power (x1) and activation time (x2) with MB removal (y1) and RHAC yield (y2) as responses. The code levels for CCD are shown in Table 1.

The response values that obtained from the experimental works using the design of expert software are shown in Table 2. The polynomial regression equation was developed using CCD. As suggested by the software, the quadratic and linear models were selected for MB removal (Y1) and RHAC yield (Y2), respectively as the best model to correlate the data to the response. 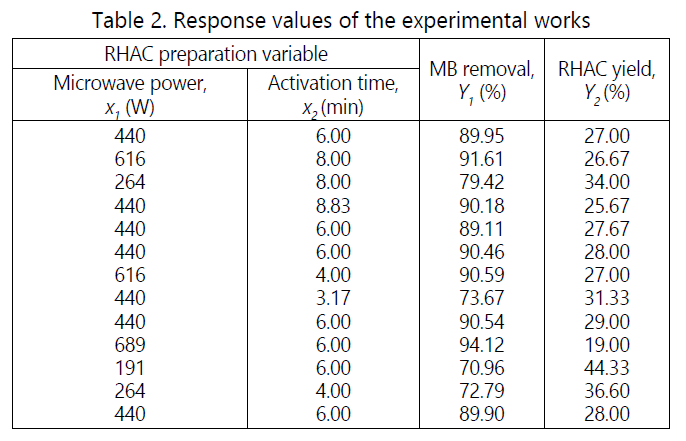 The final empirical models for MB removal and RHAC in term of coded factors are shown in Equation Equations 1 and 2 respectively,

The correlation coefficient, R2 value were used to evaluate the suitability of model equation. The model developed is the best at low standard deviation and high R2 statistic which is closer to the unity. The R2values for Equations 1 and 2 were 0.9546 and 0.9052, respectively. The higher R2 values indicate that the predicted values for MB removal and RHAC were closer to its actual value [5].

Analysis of variance (ANOVA) was carried out to justify the adequacy of the models. The ANOVA for the quadratic model of MB removal is shown in Table 3, where the F-value of 29.45 and Prob>F is 0.0001 prove that the model is significant. The microwave power (x1), activation time (x2), quadratic term of microwave power (x12) and the quadratic terms of activation time (x22) were significant model terms whereas the interaction terms (x1x2) were insignificant to the response.

Table 4 shows the ANOVA for quadratic model for RHAC yield. The model F-value of 17.65 and Prob>F of 0.0005 indicates the model is significant. Based on the result obtained, microwave power (x1) and the activation time (x2) were significant model terms. 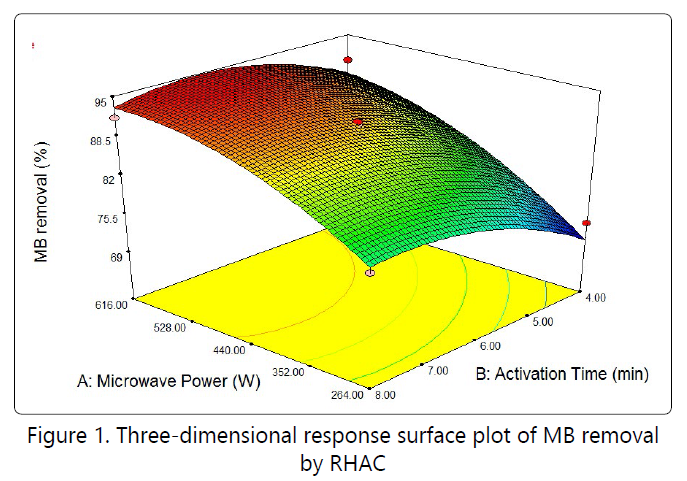 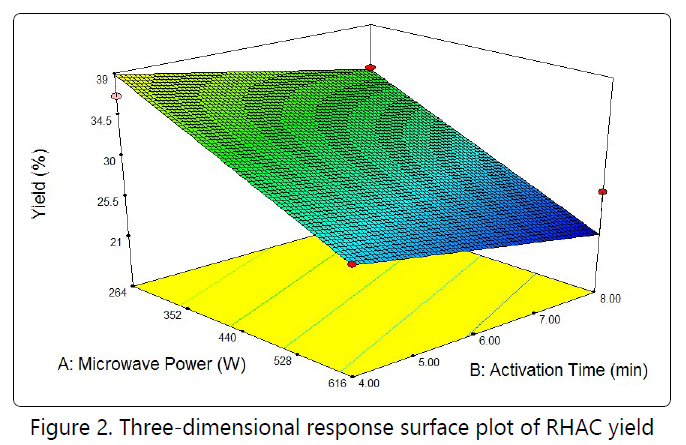 The aim of this study is to obtain the optimum parameters of RHAC produced with highest RHAC yield and MB removal. Design Expert software was used to compromise between yield and MB removal while optimizing both of these values by selecting the highest responses from the experimental result. The optimum operating conditions is depending on achieving high MB removal. The experimental conditions with the highest desirability are shown in the Table 5.

The optimum preparation conditions were obtain at activation time of 4.28 min and microwave power of 440 W, which resulted MB removal of 83.05% and RHAC yield of 31.98%. The error for the MB removal and RHAC yield between the experimental and predicted value are 1.05% and 1.75%, respectively, which indicates sufficient accuracy of the process optimization.

The authors are grateful for the funding from Solid Waste Management Cluster (RU 1001/CKT/870023) and Bridging Grant of UniversitiSains Malaysia.