Emeritus Professor of Ben-Gurion University of the Negev, Beer-Sheva, Israel

Chemistry is the science concerned with the composition, structure, and properties of matter, as well as the changes it undergoes during chemical reactions. The latter is defined as "a process in which one or more substances are changed into others." Chemistry is generally divided into inorganic chemistry and organic chemistry where another division is physical chemistry and analytical chemistry. The history of chemistry began more than 4,000 years ago with the Egyptians who pioneered the art of synthetic "wet" chemistry. By 1000 BC, the ancient civilizations were using technologies that would form the basis of the various branches of chemistry. Extracting metal from their ores, making pottery and glazes, fermenting beer and wine, making pigments for cosmetics and painting, extracting chemicals from plants for medicine and perfume, making cheese, dying cloth, tanning leather, rendering fat into soap, making glass, and making alloys like bronze [1].

In the Middle Ages that began around 500 AD and lasted until 1400 AD there was a "science" called alchemy - the forerunner of modern chemistry. The main objectives of alchemy were to find the appropriate combination of ingredients that would cure all illness and diseases, to find the chemical that would prolong life, and to convert lead into gold. Nowadays the above goals have not been neglected - possibly just realistically modified.

Chemical reactions are processes by which the original substances are changed into new ones by making or breaking of chemical bonds. Interesting reactions, not yet well understood, are those taking place in our brain. When we think a thought or feel a sensation from the outside world, it is the result of chemical reactions in our brain; drugs and food can have a significant effect upon our brain chemistry. Each chemical is characterised by a symbol or a formula derived from the scientific name of the element where a specific reaction is described as combination of the formula of the reactants and products, for example A B. It is interesting to note that also in the brain there are reactions caused by the brain cells, when for example we see something attractive. And finally, two additional basic definitions. Chemistry laboratory is defined as "a laboratory for research in chemistry" or "a workplace for the conduct of scientific research" where the chemist is "a scientist who specialises in chemistry". The original physical chemistry laboratory was built in Oxford University in England.

In the following different aspects of chemistry are demonstrated by artworks. Figures [1] [2] presents the chemistry laboratory painted by the Albert Edelfelt, a Finnish academic painter (1854-1905). The chemist in the artwork painted in 1885 is Louis Pasteur (1822-1895), a French chemist and microbiologist best known for his remarkable breakthroughs in the causes and prevention of disease. 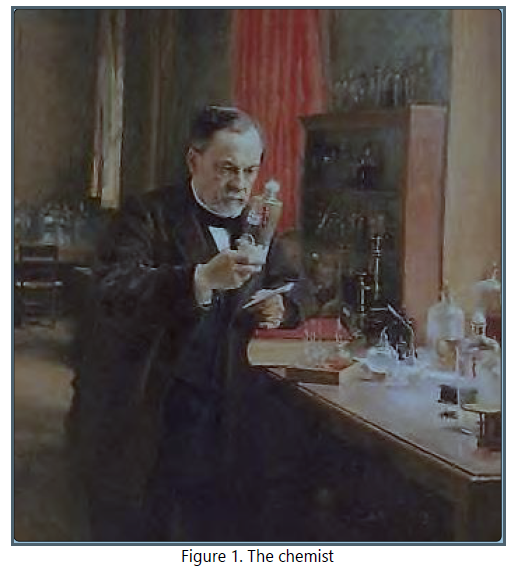 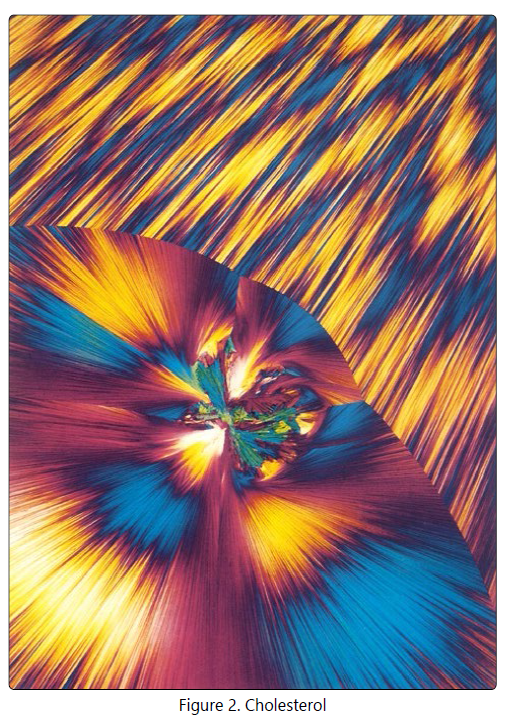 Figures 2-6 [3] demonstrate science creating art in images of different chemicals photographed by the research scientist Michael W. Davison through a microscope, or more commonly by photomicrography. 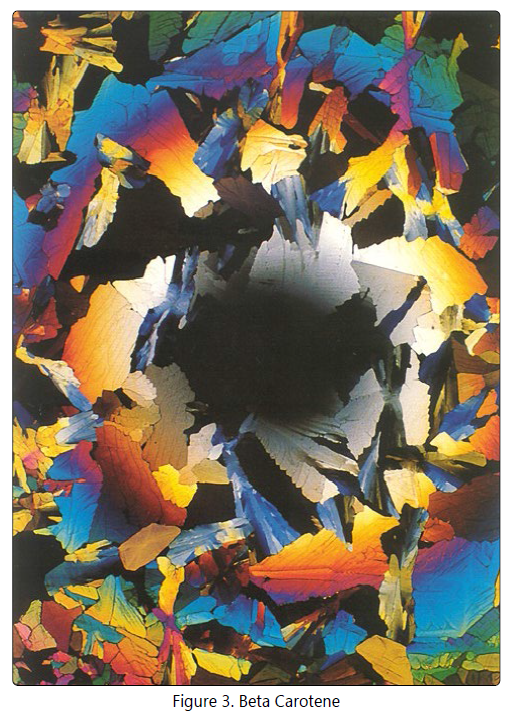 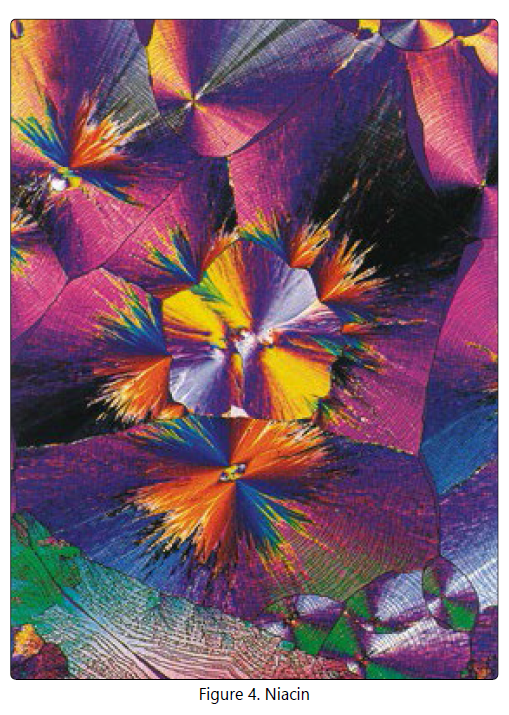 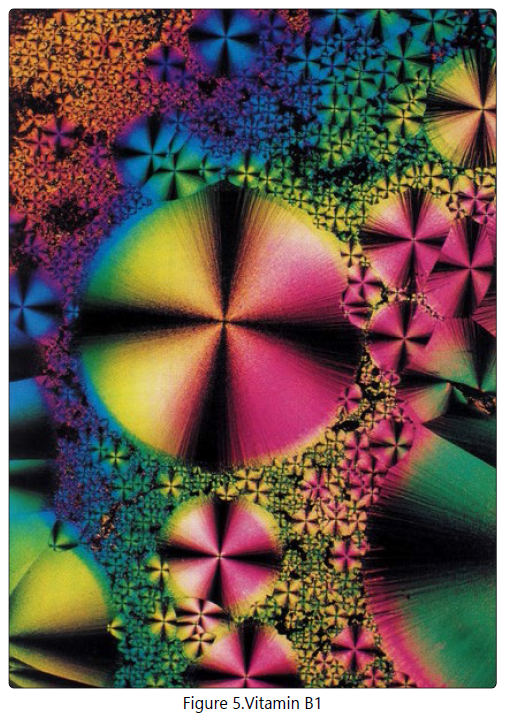 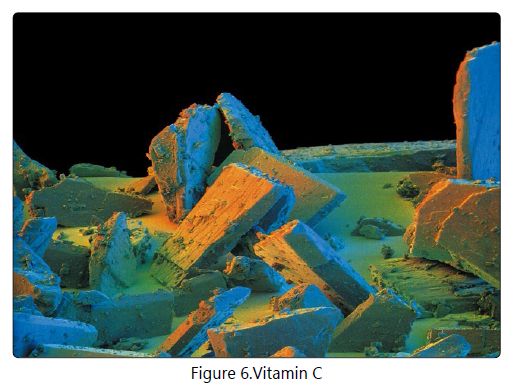 Figures 7-11 demonstrate by artworks different chemical reactions. The reaction A+B+C ABC is demonstrated in Figure 7 by images of three important chemists, each demonstrates a certain "reactant" as follows. On the left-hand-side is the image of Paul Sabatier (1854-1941), a French Noble Prize for hydrogenating organic compounds. In the center is the portrait of the Fritz Haber (1868-1934), a German Noble Prize for the synthesis of ammonia from its elements. On the right hand- side is the image of Irving Langmuir (1881-1957), an American Noble Prize for his contribution on surface chemistry. The combination of the images, namely the reaction "product", is an interesting face combination in which at first glance one will tell you that he sees six eyes. However, a thorough look reveals only four eyes due to the common eyes. Figure 8 demonstrates the reaction AB A+B. It is based on the artwork "2 motifs system IVB"[4] by Maurits Cornelis Escher (1898-1972), Dutch, one of the world's most famous graphic artist. Here, the original artwork is the left-hand side that was separated by the authors in order to demonstrate the reaction. An additional reaction demonstrated in Figure 9 by an artwork is

2A+B 2AB. It is also based on Escher's artwork"2 motifs, transitional system IA - IA "where the original artwork is the right hand- side part. Figure 10 demonstrates the Belousov - Zhabotinskii cyclic chemical reaction [5]. In the picture we see top views, at different times, of the surface of the apparatus in which the chemical reaction takes place. No doubt that the real pictures may be considered as astounding artworks. The last example of a chemical reaction is related to our brain [6]. When we think a thought or feel a sensation from the outside world, it's the it's the result of major chemical reactions in our brain due to the chemicals in it. Some of the important chemicals are called neurotransmitters. Figure 11, right-hand side [7], may demonstrate a reaction in the brain where the modified left-hand-side is the situation before something affects the brain. 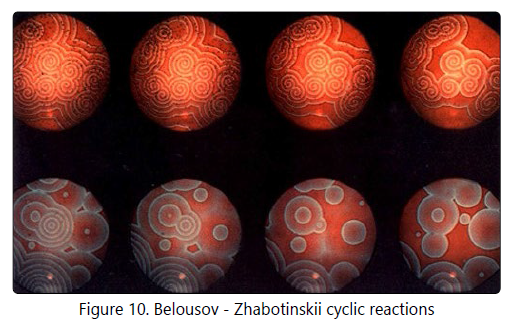 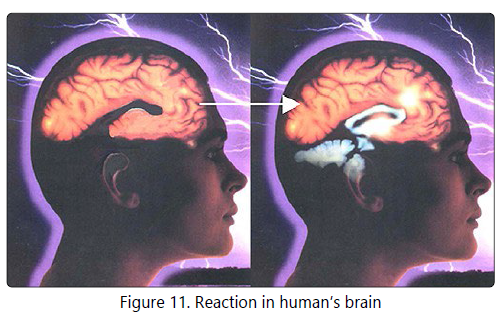