In recent years the demand for ultra-clean hydrogen is increased significantly to power polymer electrolyte membrane (PEM) fuel cells. [1, 2]. Conventional steam reformers produce hydrogen with a high level of traces of impurities not suitable for the PEM. Today, hydrogen perm-selective composite membranes produce high quality of hydrogen. Moreover, they play an important role in displacement of thermodynamic equilibriums [3-6] and enhancement of the reactors performance. Further improvements are still needed for best design and operation.

Surprisingly, theoretical studies of multi-stage fixed bed membrane reactors (MSFBMR) for the decomposition of ammonia are scarce. In this study, the mathematical modeling and numerical simulation approach has been implemented to investigate application potential of multi-stage membrane reactors for production of ultra-clean hydrogen. The benefits that can be gained by these reactors configurations are explored. Moreover, deeper insight understanding of the process might be gained. Furthermore, the effect of the key parameters on the performance of the MSFBMR are considered.

The decomposition of ammonia is represented by the following reaction:

Where fi is the fugacity of component i. The equilibrium reaction constant is by the following equation:

Where T is the absolute temperature (K).

The mathematical modeling of the FBMR

A rigorous two-dimensional heterogeneous model is formulated for ammonia decomposition. A schematic diagram for two multi-stage fixed bed membrane reactors is presented in Figure 1. The following assumptions are used to develop the mathematical model: 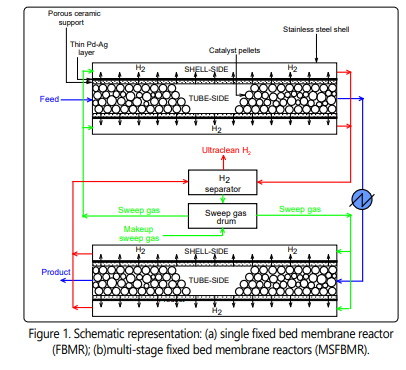 The material balance equation for component i on the tube side is given as:

Fuller, Schettler and Giddings correlation is used for the binary diffusivity (Dij) :

Where T is temperature, P is pressure, v is the atomic diffusion volume and M is the molecular weight.

The component mass balance equations for the ceramic support is given by:

Where e2 is porosity of the ceramic support and d is the membrane thickness.

The conversion of ammonia is given by:

The global orthogonal collocation technique [13] is used to change the partial differential equations into ODEs which can be integrated directly.

The material balance for component i in the catalyst pellet is given by:

The component material balance equations in a dimensionless form can be written as :

where ω is the dimensionless coordinate and C is the total concentration. The effective diffusion coefficient is given by :

Where e is the intraparticle porosity and Di is bulk diffusion coefficient of component i:

The diffusion coefficient of component i (Di°) at 0°C and 1 atm is given by:

and Xi is given by:

Where X is the mole fraction vector.

On the permeation side the material balance for hydrogen is given by [14]: 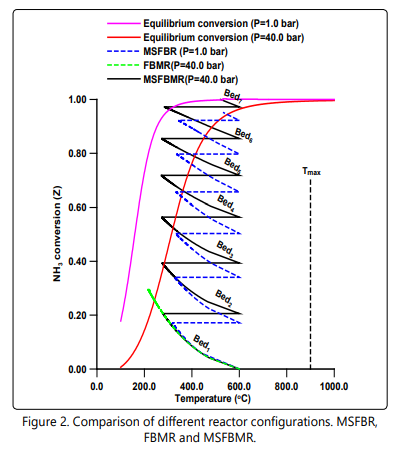 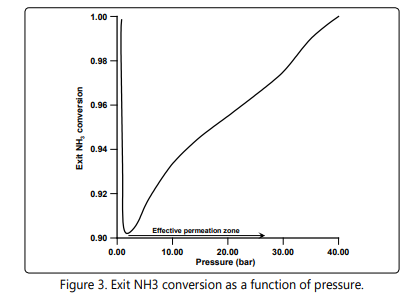 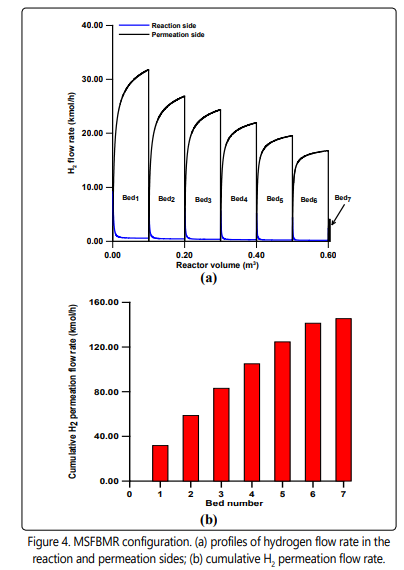 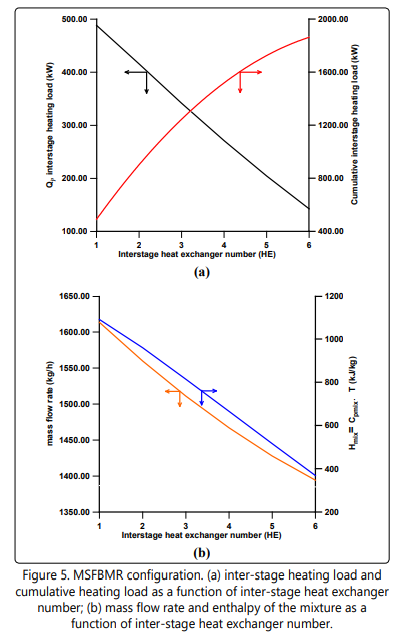 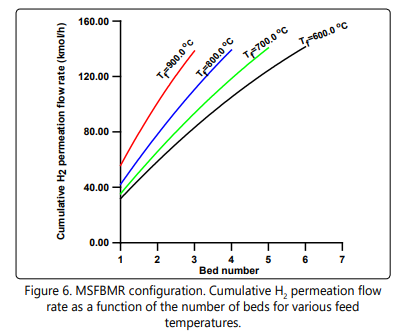 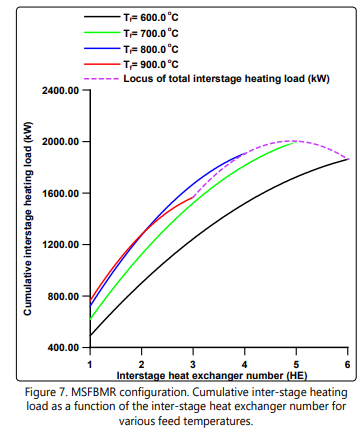 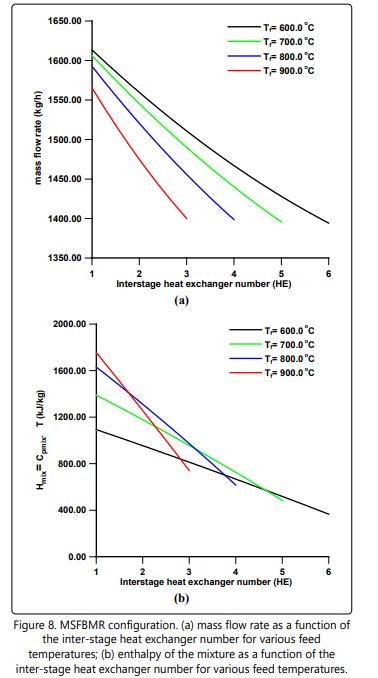 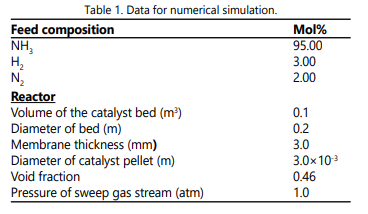 Ammonia decomposition is an attractive carbon free single step process for production of hydrogen. In this paper, the conducted numerical simulation has shown that the multi-stage membrane reactors (MSFBMR) for ammonia decomposition have significant advantages over the single fixed bed membrane reactor (FBMR). Also, the MSFBMRs have attractive potential application for efficient production of ultraclean hydrogen suitable for the PEM fuel cells. The results suggested that the multi-sage configuration is suitable for the on-site hydrogen production. The hydrogen membrane, number of beds and the inter-stage heat exchangers strongly influenced the performance of the MSFBMR. Since, the diffusion limitations effect is shown to be confined to very small regions in each bed a pseudo-homogeneous model can be utilized as an initial trial model to extract some features of the process. The results of this preliminary study might have fundamental importance in designing of the MSFBMR for the ammonia decomposition. Optimization of this process will be addressed in the future research. To this end, the compelling merits of the MSFBMR dedicate that intensive efforts still needed in academia and industry levels.