The thermodynamic characteristics of the compounds and their total energy, transformation energies, entropies of transformations, and normal vibration frequencies have been calculated. It is shown that the calculated free Gibbs energies for the formation of isomerization products of per hydroaromatic hydrocarbons are in qualitative agreement with the experimental data of isomerate products.

In the Gulf of Mexico found tiny black diamonds- according to scientists, they were formed from crude oil. These diamonds consist of a force of several dozen carbon atoms, which is less than one billionth of a carat. However, similar hydrocarbons of a diamondlike structure can also find practical application. Their artificial analogues are already used in medicines intended for the treatment of Parkinsonʼs disease and viral infections [1, 2]. In addition, they can find application in the field of nanotechnology [3]. Diamond materials are derivatives of the saturated hydrocarbon adamantane, which was found in oil as far back as 1933. The spatial arrangement of carbon atoms in the adamantane molecule is the same as in the crystal lattice of diamond. Numerous adamantane molecules can join together, forming larger diamondoids.

When a large number of such molecules are combined, a diamond is formed-a characteristic regular lattice consisting of carbon atoms.

A group of scientists from ChevronTexacoʼs research division, led by Jeremy Dhala, discovered diamondoids consisting of several (up to 11) adamantane molecules in the oil deposits raised from the bottom of the Gulf of Mexico.

Before, under laboratory conditions, it was not possible to combine together more than four such molecules.

It is completely incomprehensible how diamondoids can be formed from hydrocarbon chains, of which oil consists. Perhaps, they are formed during reactions with methane, the catalyst in which the minerals that make up the clay are. If this is so, nothing prevents them from continuing their growth further, reaching quite sizeable dimensions. It was also found out that diamondoids can form black agglomerations with tiny crystals of diamonds called black technical diamonds. The latter, apparently, were formed not in the conditions of high temperatures and pressure, like ordinary diamonds. A number of scientists believe that they could form in space and get to Earth together with a meteorite substance.

The adamantane molecule has a high degree of symmetry. Some elements of symmetry of adamantane are preserved even when one or more substituents are introduced in the position of the nucleus.

Adamantane and its derivatives have been the object of many studies, both experimental and theoretical.

The aim of this work is to conduct experimental studies and quantum chemical calculations by the method of functional of the energy from the electron density the DFT B3LYP/6-31G*, to study the structure and thermodynamic properties of alkyladamantanes composition C11-C13.

The data of the exact standard enthalpy of formation of these compounds plays a decisive role in the estimation of calculation methods.

The thermodynamic stability of some alkyladamantanes was determined by calculation and experimental methods, and then compared with each other [10].

To minimize the errors in the calculations, 1- and 2-methyladamantanes, 2,2-dimethyladamantane, 1,3,5- trimethyladamantane were purified by standard methods (recrystallization, vacuum sublimation) before burning in the calorimeter, and 1,3-dimethyladamantane was purified by repeated fractional distillation under low pressure. Was used 1 cm3 of water was placed into the calorimetric bomb of internal volume 0.1 dm3 with calibration and additional equipment and then oxygen pressure up to 30 atmospheres at 298.15 К was established. The vapor pressures of all the solid compounds were measured in a glass Bourdon gauge that was nulled against a mercury manometer. The vapor pressures of these compounds were fitted by least squares to the equation
log10 (p/Torr) = A/T + B (1)
and the enthalpy of sublimation was calculated assuming no vapour imperfection and negligible solid volume as [16]
∆Hsub = - RAln10 (2)

The vapor pressure of 1,3-dimethyladamantane is determined by semi microebuliometric method [17].

The results of the calculations are presented in Table 1.

We performed quantum-chemical calculations using the energy-functional method from the electron density of DFT B3LYP/6-31G* perhydroacenaphthene, perhydrofluorene and the products of their transformations [18, 19]. Optimization of the geometric structure of molecules and calculation of the frequencies of normal vibrations were carried out using atomic bases 6-31G*. Calculations were performed using the GAUSSIAN-98 program [20]. DFT B3LYP is a combination of the Charter-Fock method and the density functional theory using the gradient-corrected Beck function with three parameters (B3) [21] and the Li-Yang correlation functional series (LYP) [22]. For each molecule, the geometric arrangement of atoms was optimized using analytical calculation methods. By calculating the frequencies of normal vibrations using the second derivatives, it was confirmed that the stationarity points determined in the optimization of geometry are energy minima. 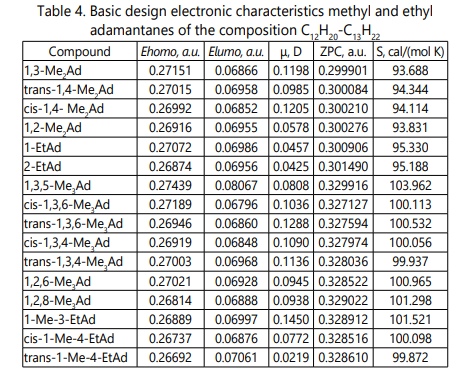 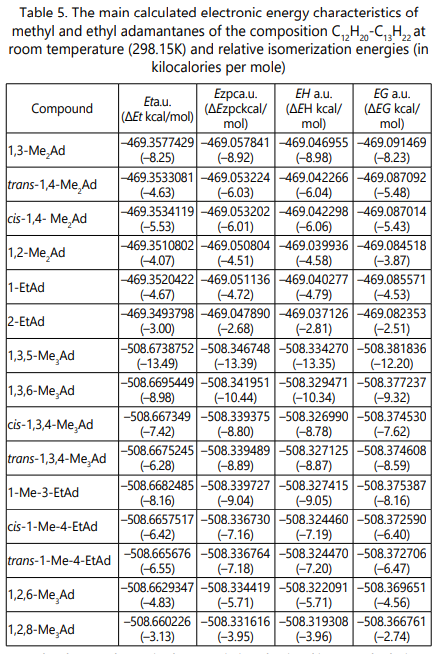 The thermodynamic characteristics obtained in our calculations are in excellent qualitative agreement with experimental data on the isomerization of perhydroacenaphthene [1].

Thus, the results of the calculations presented above agree with the previously published experimental data that the number of different isomers of methyl- and ethyladamantane formed in the isomerization of perhydroaromatic hydrocarbons is due to the difference in their thermodynamic stability. It has been established experimentally that the reaction is an equilibrium process.